Gesture, a matter of composition

In the attempt to develop «active music» characterized by multiple links with its electronic and theatrical environment, musical gesture appears not so much as a musical parameter as the essence of active music. I have always been interested in mixed music, in confronting the instrumental field to other types of sound expression or to other media. This has led me to analyse the visual and sound impact of musical action. Musical gesture doesn't result from notation, it's all the reverse : musical gesture comes before notation. A composition comes to birth with the first gesture which then reveals a space, a form and energies turning into rhythms : movements have then become as important as the sounds they create.

The interconnection of gesture and notation could actually characterize the musical theatre genre as well as many works taking into account the «sound action» idea. Let us take for example "Schattenklange" by Maurizio Kagel. There, the soloist playing the clarinet, is performing behind a screen lit by several projectors. The public discovers him surrounded by several shadows carefully organised by the author, and as the projectors create magnifying or reducing effects, the musician's movements are particularly emphasised. This situation is neither acousmatic nor specific of a concert, it rather shows how the musical act is highly scenographical since it enables the public to see the sound project.

Jani Christou's music and more particularly his work series composed at the end of his life provide a very accomplished approach of gesture seen as a musical vector. The score of "Anaparastasis III - The pianist" shows a graphical context which looks like  fascinating musical stage directions. This work puts on stage a soloist (piano), an instrumental ensemble with conductor and electronic devices. The score doesn't use so much conventional notation and however we are absolutely struck by such a consistency when we see this gesture notation offering quite magically a genuine sound quality.

Choreographers have made countless attempts to note down dancers'movements. They would find here a striking intermediary with this gesture notation describing a global intention specific to musical writing and totally effective.

Concerning musical gesture, we may also rely on the help of technological tools as they can certainly reduce perspectives or reverse expected consequences. They may even detect minute information or thanks to statistics, capture a specific parametre of the musical game.

On other occasions, they may simply magnify reality, increase the weight of the musician gesture with audiovisual means for instance. This may of course be called redundancy but what about the conductor raising both arms (sometimes with great emphasis) on the orchestra tutti fortissimo ? At this point, Thierry de Mey would certainly give us a brilliant answer with his «conductor solos» ; his work "Light music" provides a relevant example and shows a genuine renewal of the gesture concept and its musical impact.

The field of sensors (systems enabling real-time analysis of changes in physical parameters) has tremendously increased and developped in the last few years, so that every artist, whether he (she) is a musician, an actor or a dancer considers them as additional tools for his (her) research.

I have interested myself to the question of musical gesture and produced several projects, a dance solo in particular : N, N, N in collaboration with the choreographer Myriam Naisy, between 2001 and 2003. When you start working with this system in which you very easily assign sound parameters to gestures, you are really tempted to rely on improvisation as the system proves so obviously efficient (probably because it is new). In the end, we decided on a completely opposite way of working and we agreed that notation and time structures would serve as a mediating element for  both fields.

To sum up, I could say the first step consisted in writing the music which was then used as a point of departure for further developments, it served indeed as the frame from which we wrote a gesture score (essentially concerning the dancer's hand and its movements, analysed by a set of movement sensors). As a matter of fact, that score became a sort of rough trunk providing clear directions as regards movements and their duration, enabling then the choreographer to deal with the dancer's staging. 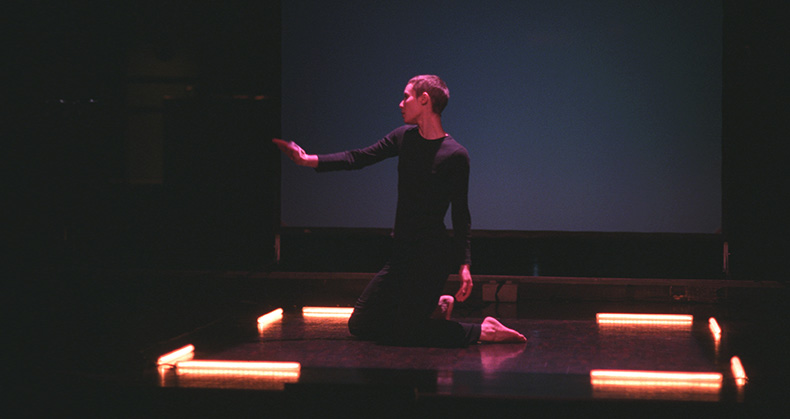 In "In and Out", a violin and cello duet plus audiovisual device, the idea was to measure gesture exaggeration with a video system. In one particular sequence, music coming from the duet, goes next to a group of ten strings, eight of them being virtually materialized on screen. There, we can see a mosaic created by varied close ups of different instruments being played.

Musicians (on the stage and on the screen) either play conventionally or perform movements which let out no sound but are exaggerated by the close up. In this peculiar situation, gesture has become the common denominator of both spaces (stage and screen) and the source of a kind of poetry going much beyond a strictly musical interest.

In such a polyphonic situation where it is impossible to spot any source (which part do the two soloists really play ?), musical gesture is the first and only perceptive axis on which the listener can rely. 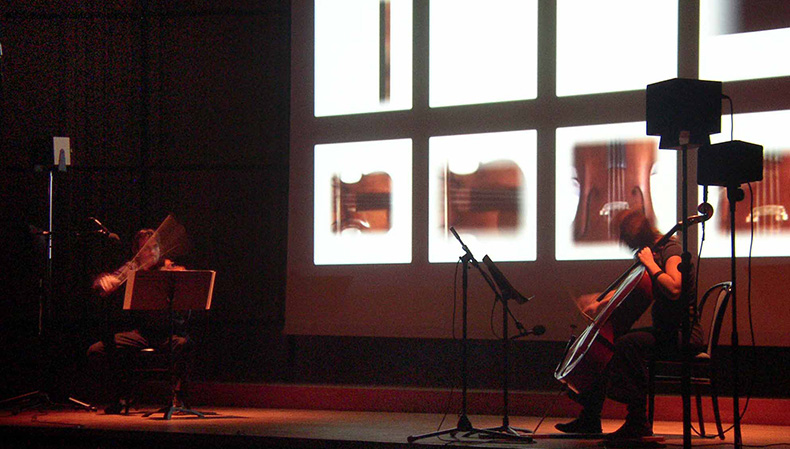 This type of approach can't be considered as a scenographic experiment only. The issues would more really stand in questioning the relationship between a physical presence, his (or her) scenic stage environment and electronic media (sensors, sounds, pictures). Musical gesture may become the  source of absolutely new ambitions. We may refer to William Forsythe or to the french comedian Philippe Caubère ; we know choreographers' or actors' gestural ability to give birth to objects, spaces and limits and even to invisible fields of conversation.

Today, Musical gesture is no longer the result of a prior intention : being analysed with digital tools and increasingly confronted to other forms of artistic expression, it provides the opportunity for new relationships between musicians, instruments, sounds and images...