Hoarse blasts, fugitives, short melodies, broken gestures continually renewed, a creaking door, a very low drum, incantations, a distant fire burning, soft sounds feedback, these are the elements of "Shards of heaven." Fragments of a heavenly country, as conceived by the ancient Mexicans Aztecs, is divided into thirteen heavens one above another, thirteen allegorical worlds in the heart of the elements, colors and polymorphous gods.

According to "La Historia de los Mexicanos por pinturas extra" quoted by Jacques Soustelle, each of the heavens was a world apart in which the deeper meaning remains enigmatic. Thus, the first heaven the stars are associated with the second, the tzitzimime (skeletal-looking monsters that broke the world) in the third, the four hundred guardians of heaven (...), the seventh being the country dust (...), the thirteenth dedicated to divine couple : TONACACIUATL & Tonacatecutli. Through a distorting lens, I delivered a set of associations of each of the heavens in a "state musical" bottom-up and short phrases from the fire-flame-gesture, sounds of blasts in Figure wind, multiphonics to divine worlds, long songs down to the birds that descend on earth...

Beyond identifying these representations, the musical concerns, including the formal aspect, led me to the disruption to this chronology preserving the deeply poetic aspect of these different worlds. The allegory becomes musical, abstract, with ambiguity of poetic facing the unspeakable, the electro-dose bringing its disruption by the presence of sound symbols, such as opening the door on ever a new heaven... It is the emblematic figure Quetzalcoatl, the plumed serpent, which is devoted the central part of the work, entitled "Agony of the Serpent of Fire" ; its death is a symbolic transformation of the discourse, more refined, is deployed in space-time increasingly stretched. So the work is moving slowly to the incantatory resonance of the ancestral drum of sacrifice... 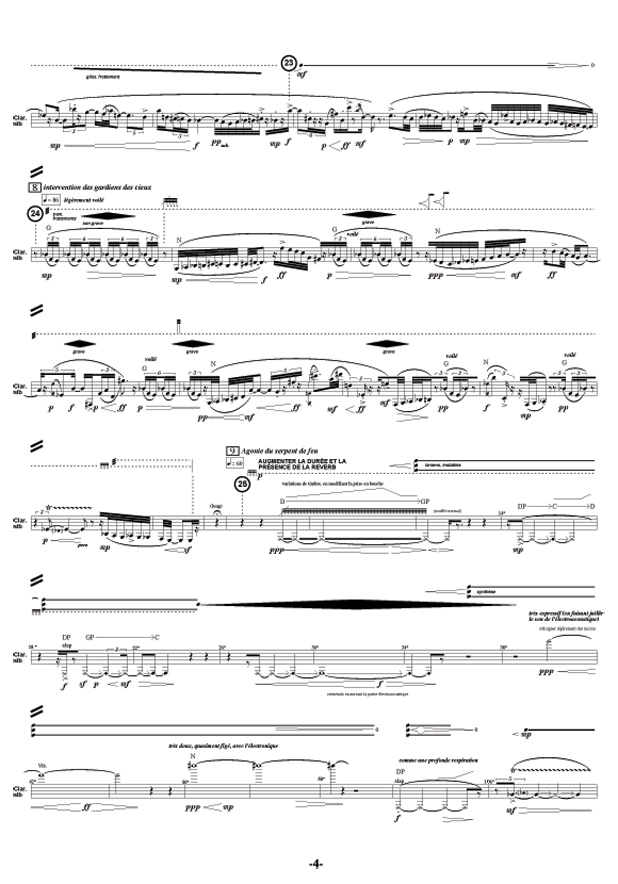