"La vie : mode d'emploi" (Life, a user's manual) was published by G. Perec in 1978. More than 30 years later, Pierre Jodlowski pays him an obvious tribute with his new work PASSAGE. Rather than compiling potential, either true or fictional stories, Jodlowski has explored the «memory» of the Siemens Building. To do so, he interwiewed the people who work there and collected their sound memories.

PASSAGE was commissioned by the Siemens Arts Program, were there any specifications or requirements ?

Well, the only obligation was to associate the company employees to my work and apart from that, I was entirely free to do what I wanted. However, I wasn't interested in working only on the sounds of such an office. Those sounds could certainly have been sublimated, for exemple on eight channels sound system and then associated to each other to create really beautiful textures, but it would not have meant anything else than the everyday environment the Siemens people already know. Actually, I thought a sociological approach would be much more interesting. Over 2000 people (from the C.E.O to secretaries and accountants, managers and engineers) work in the Saint Denis Siemens Building where we'll have the installation. I decided on a more intimate approach by working on their personal memories.

So, it seems you are back to one of your favorite theme, the theme of Memory which is to be found in most of your compositions...

Well, I don't believe music is an abstract art, it actually conveys lots of things, it's a kind of catalytic power which helps me to get rid of my fears. Death, but also life meaning are at the heart of my questioning when I write music and I have realised that memory is an essential safeguard from collective consciousness although it's a very fragile protection which is unfortunately bound to disappear. So to me, memory is a philosophical but also social and political concern.

Why can you say music provides a place for memory ?

Well, music is nothing else than the art of time ! Can't we say that sounds own very suggestive powers (just the same as places and things) ? They very strongly help us to build our relations with the world. For instance, some sound pictures will cause the listener to remember something. Some time ago, a friend gave me a typewriter and as I was using it I couldn't help wondering what its typical noise could mean to a five-year old child today. Probably nothing, whereas it still remains very evocative to us.

What about the memories you collected ? Are they of the same kind ?

Some of them are, but I would say I got several types of memories. First of all, I had what I would call universal memories, most of them being related to natural phenomenons : the sound of waves, of people walking in the snow, of the wind blowing through the chimney. Sometimes, people were quite precise : «crickets singing in Summer are associated to an impression of warmth and well-being». 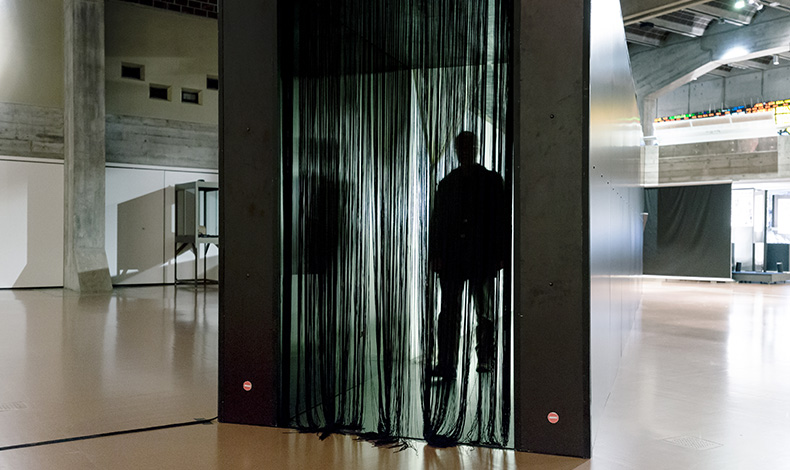 No, not really, I'd rather have the term of «sound icons». They certainly are commonplace but they remain very formative for people. Apart from that, we found more confidential memories : «the ticking of my grand-mother's alarm clock» followed by this precision «you know, the kind you wind up» ! I encouraged people to be spontaneous. What women mostly remembered was the noises made by their new-born babies at maternity hospital, whereas men mostly mentioned those connected to relaxing in Summer ! Water noises were often mentioned ; we must not forget that our hearing faculties develop during pregnancy and aquatic sounds are what we hear first in our human life. Finally, I had to deal with very personal and complex memories given to me as if they were sequence shots : «It's a party, it takes place on a barge on the river Seine. Dominique takes his horn and plays. Another barge goes along ours and the captain sounds his horn. I still remember the merging of both sounds» !!!

How did you proceed for this work?

Well, it was an anonymous and free exchange, but I really considered their involvement as a gift. They confided their memories to me as a composer and I gave them back to them through an interactive process. Their memories had been associated to other people's, people they were probably meeting every day although they might not even talk to them. We decided memories should be written as it makes confiding easier. Besides we learn quite a lot from the writing itself. After collecting all memories, I started composing. There were two different steps : First of all, I tried to collect and arrange every sound and really stick to the descriptions I had been given. Sometimes it was rather hard : What about the specific croaking of the Guyana toad… ? I also had to pay attention to my imagination. In a few cases, I had to do some extra work with people and encourage them to go further in their analyse and precise a few elements. That enabled me to discover the specificity of each sound and their potential to activate mental images. The second step consisted in «fictionalizing» each memory and in doing so, I tried to be faithful to its nature and its owner ; therefore I didn't hesitate to add some abstract sounds to create a tension or suggest the particular atmosphere which had been described. Finally, the tunnel itself had to be built : it's 10 meters long and 1.60 meters wide. Movement sensors are set every 50 centimetres. Behind translucent walls, there are 8 indirect loudspeakers as well as the engineering and programming systems (the hardware and software) which "trigger" the sound samples and later transform them according to the visitor's movements and progress in the tunnel.

What actually happens when you cross the tunnel ?

Well, you have two choices: you may cross it and then leave, keeping in mind the memory you have activated by chance ; or you decide your crossing will take more time : memories will then become really yours and you'll find yourself in a place where you learn how to play with a new material. Thanks to GRANULAR SYNTHESIS TECHNIQUES, you may«freeze» a memory when you stop or you may control its flow and direction according to your movements and attitude. In a word, you have somehow become «the reading head» of the memory. There is also a lighting device which varies with the sound and amplifies the memory perceptions : with jerky movements, you get a distorted memory, so much so that if you move too much (as if you were unrespectfull !!!), the sound becomes violent and extremely saturated and therefore the light is glaring so that in the end the memory vanishes and dies. There is no more light nor sound in the tunnel.

What happens if several people go in the tunnel at the same time ?

Every time someone goes in, a new memory is activated but we deliberately limited the entrance to two in order to get an understandable result. Both memories will mingle which may be very disconcerting especially if the second person overtakes the first and steals his (or her) memory !!!

Siemens is a multinational : can you tell us how business world problems appear in PASSAGE ?

I can't help being suspicious about multinationals and generally speaking about a society framed by capitalism. PASSAGE provides two answers : First of all, I don't make any difference between Siemens employees, whatever their position and therefore I treated their memories in the same way. Secondly, I do hope people will be very much interested in this installation (project) I hope it will become one of their favourite topic and create a dialogue between them. May be they will talk about its contents but also about its legitimacy as a work of art or its relevance in time of crisis.