Pierre Jodlowski, from anger to colors
The composer conceives most of his shows in reaction to a world he thinks quite brutal. Such is the case for "Alan T.", inspired by the life of Alan Turing.

When one considers Pierre Jodlowski's abundant catalog, one might wonder if the composer (51 years old) is not to be classified among the versatile artists feeling as much at ease with video and lights as with sounds. The answer is given unambiguously. “I am a musician, not a director or a filmmaker, and I use the musical vector to express myself”. Therefore, everything is to be found in the score: gestural elements,  electronics, pictures, lights, everything that can be modeled. Sounds take an essential part  in the composer's work, but they don't come first :"I can't start a play if I don't visualize what's going to happen on stage, so I make a lot of drawings showing scenographies, trajectories…"

According to Pierre Jodlowski. “the score is not the music” and cannot be “shared with the public”, its primary motivation. On the other hand, the stage is essential for him, because it means a space of freedom, “a place where censorship cannot be enforced, at least in our occidental world”. The musician perceives it as a very pure way of communication, which constitutes an “absolute privilege in an ultra-technological society, where our modes of relationship are constantly digitized, shortened, channeled, observed and sometimes even controlled by the systems we use".

The denunciation of this social drift appears in Post Human Computation (2014), for electric guitar and video. It is a magnificent indictment in which the soloist's galvanizing manner of playing is thwarted by the exquisitely gentle pictures of two Vietnamese lady musicians (filmed by the composer without their instruments) and by pictures, found on the internet,  disclosing the  imposed docility of women's parades in Asia. At the end of this committed happening against sexual slavery among other things, a plastic toy guitar alone invades the screen "to demystify the figure of the "guitar hero", Pierre Jodlowski explains .When introducing the words "guitar hero" and "Japan" in internet, he came across hundreds of videos in which young women in schoolgirl outfits performed rock music imported from the United States on their electric guitars. This plastic guitar becomes then  a cultural paradox, meaning: "Stop maintaining these illusions that create monsters". 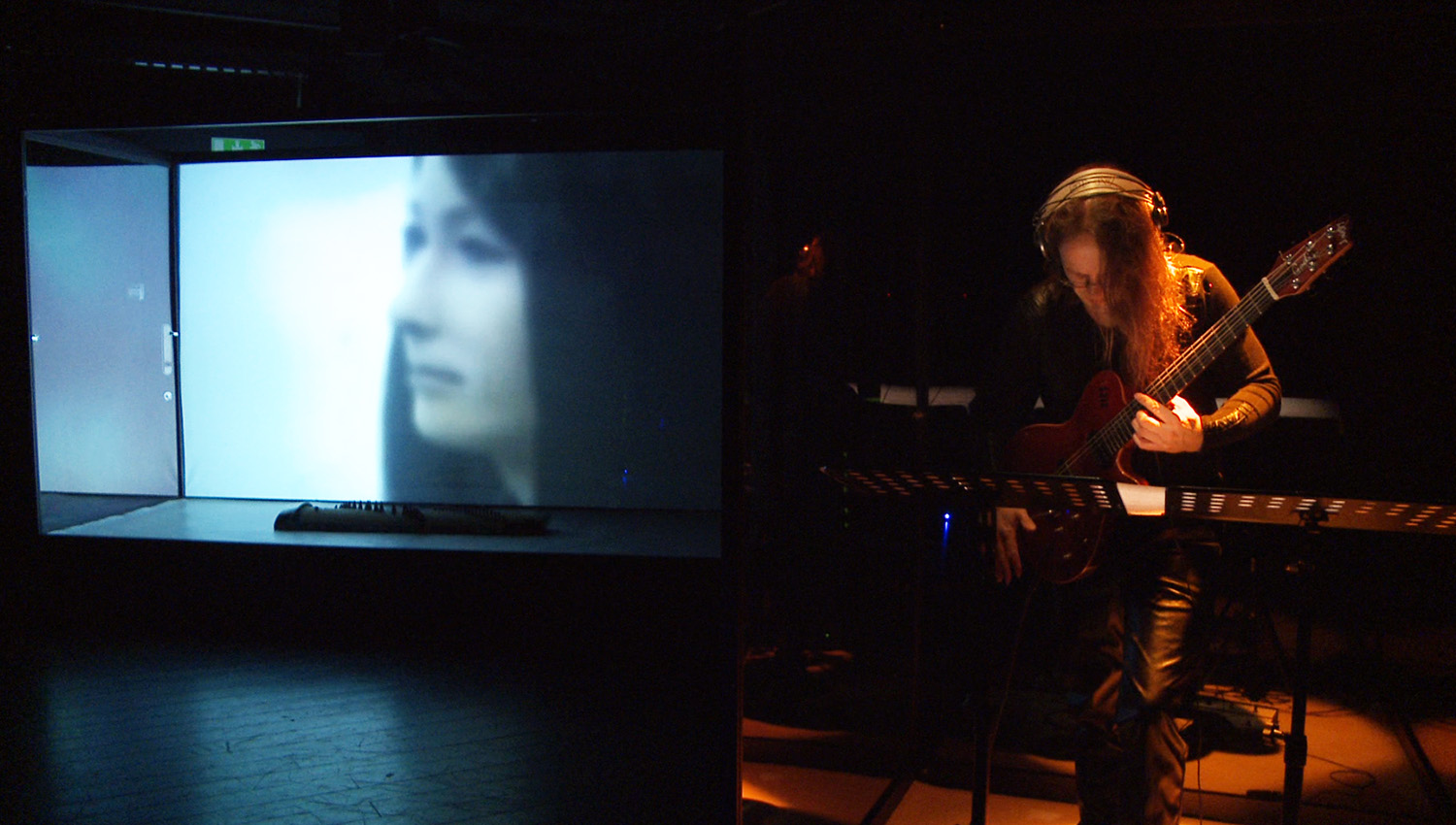 Eight years later, how does the artist manage to live in the "posthuman" world against which he rebelled? " Not so well…but I'm aware of healing myself with the works I produce. What upsets me or makes me angry in this brutal and unjust world becomes the source of my creations." Unlike his teachers, notably Philippe Manoury (born in 1952), who taught him to always consider the work as an experimental situation, Pierre Jodlowski can't imagine talking about his music "in strictly musical terms". Like Georges Aperghis (born in 1945), and two other composers to whom he feels close, the Italian Fausto Romitelli (1963-2004), for his heightened expressiveness, and the Greek Jani Christou (1926-1970), "who reintroduced in the theater an archaic dimension also claimed by Antonin Artaud".

Pierre Jodlowski studied at the Conservatoire, first in Toulouse, his hometown, and later in Lyon. In 1997, he investigated the practice of new technologies at the Ircam, in Paris (especially in the piece Dialog/No Dialog still included in the flutist repertoire). He has been living in Poland for more than ten years where he directs the Musica Electronica Nova Festival, in Wroclaw. He is still involved in éOle Collective which he founded in 1997 and currently in residence in Blagnac (France). He also travels throughout Europe as he often performs "the audiovisual environment "of his own work.

A keen use of improvisation

Pierre Jodlowski has always avoided to stick too strictly to a geographical or aesthetic universe mainly because improvisation has always seemed essential to him and this, even as a teenager (under the guise of rock or jazz played on piano, saxophone or electric bass). He shares this inclination with Benjamin de la Fuente, his eldest of two years whom he invited last February for an exchange with the young composers of the « Ircam Cursus » he is responsible for Pierre Jodlowski asserts that «being a composer means that you are also a musician, an improviser, it means that you form a group, and find an interest  in the community». He enjoys  watching a violinist play (De la Fuente for example or another musician): « I love the very powerful connection that links physical energy to the sound result », but he hates seeing electronic musicians on stage, behind a computer, « press a button and set off completely atomic things ».

For him, the machine is a companion that can be taken very far but which cannot decide in any case on the outcome of the journey. The question will be debated on June the 9th during the « Fictions-Science » meeting dedicated by the Ircam to Alan Turing, the English mathematician who, during the Second World War, played a decisive role in the cryptanalysis of the German Enigma machine and who subsequently laid the foundations of computing.

Pierre Jodlowski examined the sad fate reserved for the British scientist after reading in Le Monde in 2013 that the Crown of England had granted a pardon to the citizen « guilty » of homosexuality. « That piece of news made me angry! It took seventy years to  recognize him as a national hero... Alan Turing then appeared to me as the victim of a social tragedy, from both points of view of homophobia, and cold war since he was suspected of spying. »

Staged in Paris for the Manifeste festival and for the fourth time since its premiere in 2021 (Warsaw Autumn festival ), Alan T. marks a new stage in Pierre Jodlowski 's work through his collaboration with the playwright, Martina Stütz. She has been decisive in the realization of the project, acting « as a kind of mirror » to guide the composer's intentions and match them to the libretto written in German by Frank Witzel.


As a matter of fact, the composer has been really less interested in Artificial Intelligence, the father of which could be Alan Turing, than in the imaginary and weird world developed around this notion . « It started with Frankenstein, and then went on with 2001 A Space Odyssey, Matrix… », analyzes Pierre Jodlowski who is a real film buff. Since 2005, he has produced « series». Completely unrelated to T.V series, these pieces for piano and soundtrack are part of a cycle on colors that the composer plans to « continue until the end of (his) working capacity ». Black, White, Red, Pink and soon “Ash / Grey” (premiered by Malgorzata Walentynowicz, next December in Warsaw), those colors do and will reveal « emotional simplicity ».
Such is the soothed side of the rebellious Pierre Jodlowski. 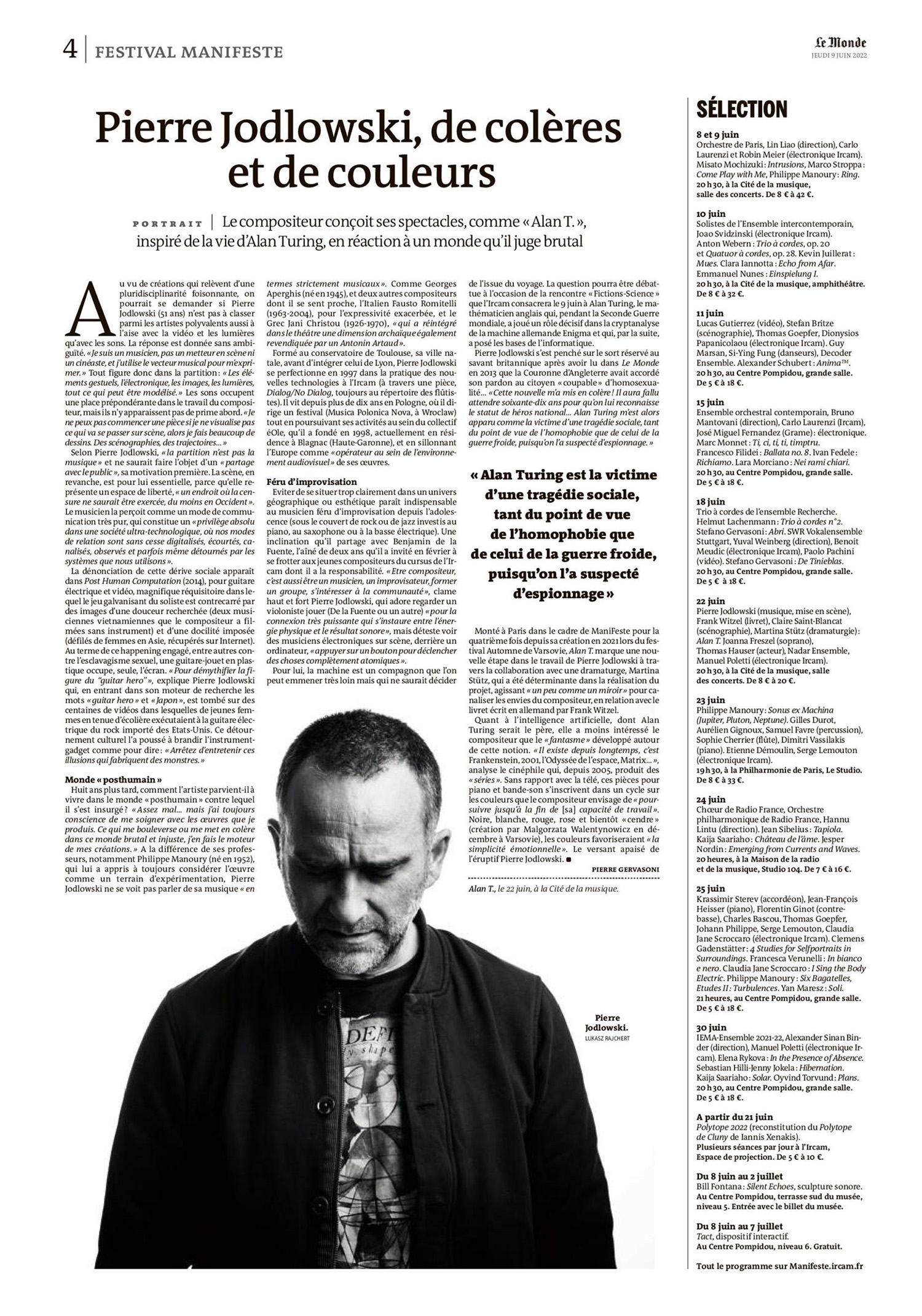 Pierre Jodlowski, from anger to colors
Portrait of the composer by Pierre Gervasoni