This project is part of a cycle of works written around the principle of cumulative writing. This principle consists in using electronic resources to pile up the live-played sequences. In the other cumulative pieces I have written (« 60 loops », « 24 loops », « Série Blanche »...) everything that is played by the musicians is gradually frozen in time by a looping system. Therefore, the music that is created is the result of the pileups of successive elements. We are here in an inevitably repetitive sonic context, but unlike the american minimalist school, the pileup phenomenon is sometimes really excessive which leads out to processes of tension and to a strong dramaturgical perception.

« Limite Circulaire » (« Circular Limit »), by its length, explores many sides of these principles of pileup. My initial idea consisted in realizing recordings of specific ways of playing in order to extend the montage possibilities ; we have been looking for and recording exactly 1050 different sounds exploring, through 3 instruments (Bass flute, G flute, C flute), colors and tones effects (wind-driven sounds, noises of blowing), percussive effects (noises of keys, « slap » sounds, tongue-ram), harmonic effects (multiphonics). At this stage of research, we have determined 27 special fingering recorded by the three flutes and in a wide range of colors, lenghts and intensities. These 27 keys constitute a sort of compositional matrix present throughout the piece and which determine the unity.

Therefore, this is that already very specific material that served has a basis for accumulation processes, allowing me, through digital montage, to create the final score.
During the composition stage, by manipulating these already composed « sonic objetcs », I quickly thought of the painter Escher and most notably of his « Limite Circulaire I, II and III » series realized between 1958 and 1959. The principle here is very simple: one shape is offered in variety of forms on a circular surface with a zoom effect enlarging the central zones and scaling down the border zones. The look, as often in Escher's work, loves to lose itself between the perception of the detail and the global perception, loves to identify paths, play with these scaling games, resulting in a process that always is simple.

The music I have composed doesn't try to strictly reproduce the principle of Escher's paintings but it shares the same type of perception, here transposed from the spatial domain to the temporal domain. Pileups bring us to perceive the relation to time in a non-linear way because, in each section, some elements are being repeated over and over and it is by their stubborn presence that the others are perceived. The piece structures itself in many zones that alternatively exploit the perceptive effects produced by the accumulation: harmonic effects, spatial effects, rythmic effects...

With the exception of the technique of repeat of more or less long elements, there is no other treatment applied to the original sounds. Indeed, it was necessary, into this kind of project, to impose ourselves frameworks, play with the notion of limit even if we sometimes had to be trapped in an inextricable labyrinth which solutions to get out of were never simple. These 1050 sounds have been our work companions, some kind of entities that I would position in time as many possible points of a completely utopian sonic architecture...

This piece is dedicated to Cedric Jullion and Simon Jodlowski 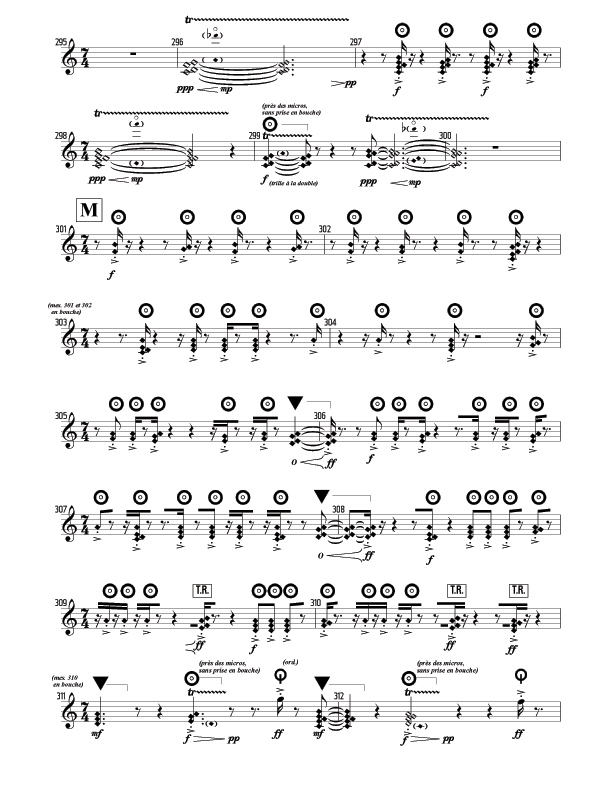