Alda Merini is one of the most important twentieth century Italian poetess. Until her death in 2009, she lived near people generally excluded from our world and shared their lives. At 16 already, she felt the first signs of a chronic depression from which she actually never recovered. She called this state of mind « ombra della mente » - the shadow of my thought -. She learnt to live with it and tried to make the best of it through her art and poetry.
The idea of a shadow blurring thought and, somehow preventing its progress, is the metaphor I referred to and explored in the musical writing of this work : the composition runs as if it were a speech which would be unceasingly interrupted and even stopped - as if chained - by a dark force preventing the normal flow of things. One application of this concept appears when the singing voice breaks into spoken words ; singing referring indeed to this mysterious force which paralyses poetical narration. The texts I have used for this project are taken from two books by Alda Merini : « Even you, after all » and « Delirious love. »

This composition is organised between narration : parts entitled « Shadows », alternating with poetry : parts entitled « Singing ». This is emphasized by the scenographic use of two tables creating two spaces devoted to writing, autopsy,friction, and unstable matter.
Music then, gives way to spaces where noises, rustlings and blowings can grow, thus trying to point out the gap which separates the individual and the world, their failure to reach a possible harmony in spite of all their efforts. 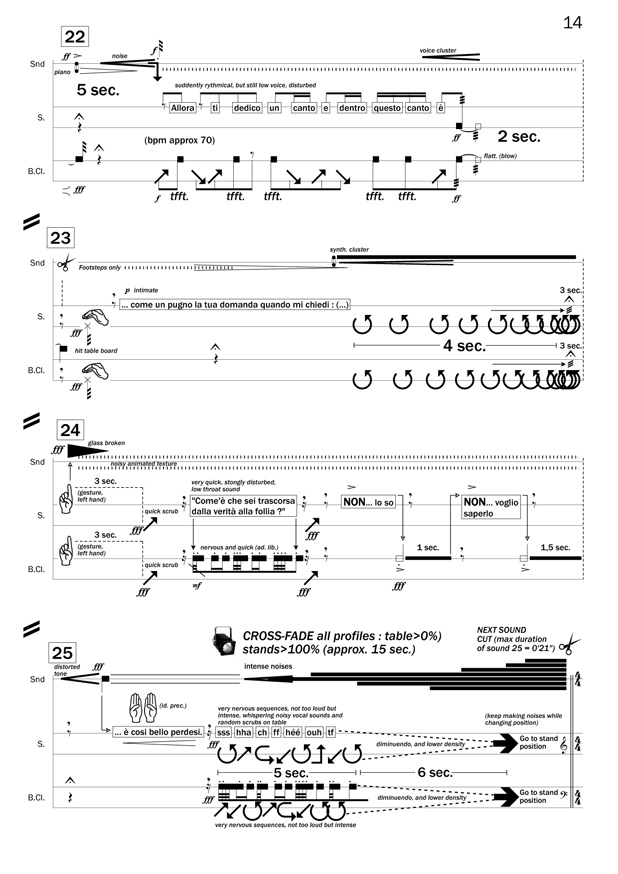 Commissioned by French Ministry of Culture