The reality of our contempory world, with its numerous conflicts (whatever their origin, military, social or economical) imposed on me when I started writing SOLEIL NOIR, a theatrical and musical work echoing the First World War, the centenary of which we'll be celebrating for four years. It might seem difficult to approach such a subject in a musical work, but it seems to me, on the contrary, that it is one of the functions of Art to day, to unite thought and memory and to confront written sources, sounds and pictures in a way that goes beyond abstraction.
At the beginning of this project, there was a long period of research into the historical dimension of that conflict, what were its challenges, its consequences and its terrible brutality. The Research Department of the Museum de la Grande Guerre in Meaux was of great help and I could investigate this dark period of our history and finally reach the conclusion that its links with present times were quite strong, just as if the lack of remembrance was a corollary to any kind of progress. I also remember walking in the countryside and forests around Verdun, these areas have long been invaded by lush vegetation but in spite of this, I could see numerous scars of a past that is still screaming the madness of men. The topography is still revealing where bombings took place, leaving improbable holes which outline a chaotic space and every day, metallic remnants are bursting out of the ground. And this, one hundred years later…
In his Ultimatum, written in 1917, Fernando Pessoa, expressed his opinion about Europe with extreme violence, accusing power (whatever it be: political, industrial and even bourgeois) to have led world reality to a state of ruin. We know what trenches were like: mustard gas, blood and mud, abomination and suffering.
As I wanted this work to echo the Great War, it was impossible to smooth out facts and situations. I wanted their perception to reach an emotional and symbolical level which is of course inevitably disturbing. Consequently, SOLEIL NOIR requires a complex language aiming to submerge the spectator in the violence of war while raising questions about our present world contradictions. The best way to understand these two propositions may well be in analyzing the structure of this work. It is actually simply based on an alternation of texts which are either read or sung. The singer is sitting at her table and speaking to the public, she gives detailed information about the soldiers' everyday life, about gas, mud, suffering, death… Then, she will stand up and sing Shakespeare's lines when King Henry The Fifth is urging his troops to fight heroically and be victorious.
Music as well as the work on staging and lights are following this alternation so that an implacable, mechanical process is set up. Music is changing from noises and textures to haunting and repetitive harmonies,  unfolding and deeply merging with the texts . Light is also dynamically handled, which emphasizes the links between the different situations. As for stage situations, they finally contribute to amplify the global perception, just as if some rituals were to take place here. 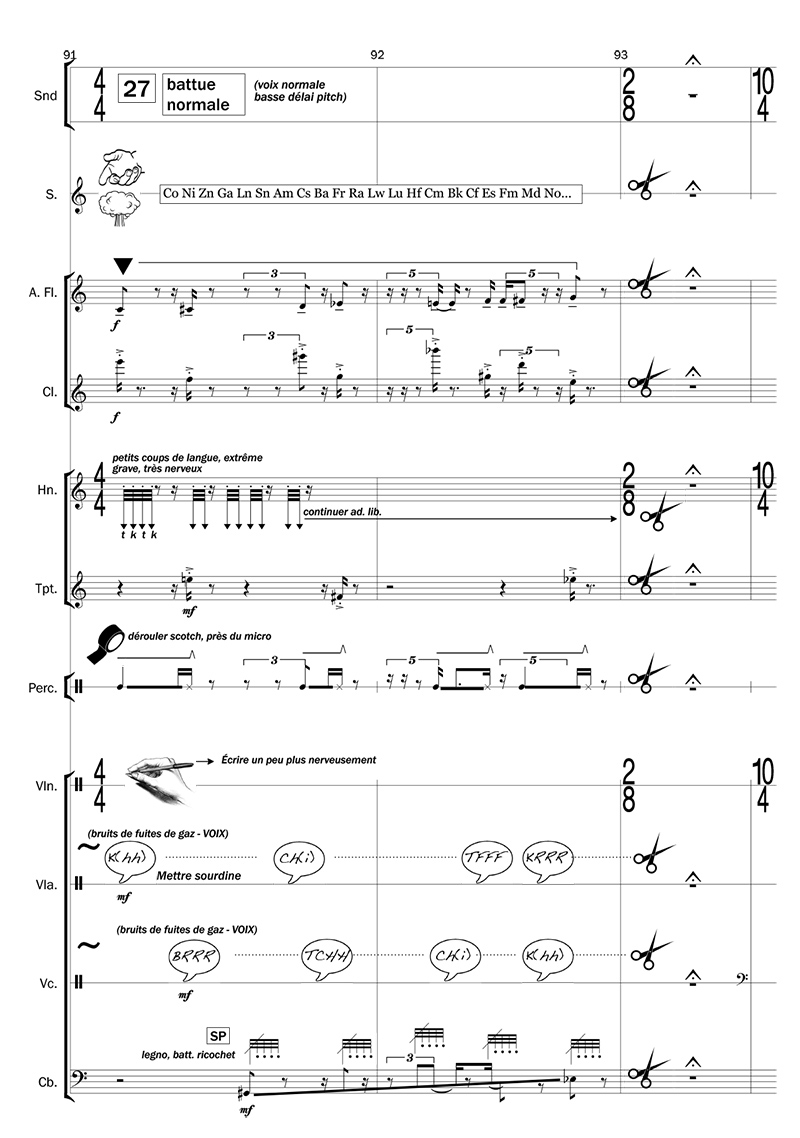 Commissioned by : Orchestra of Pau