In a certain way "Vola" finds its inspiration in the myth of Icarus.

Excluding narrative aspect, the piece incorporates some specific elements from the myth, which become a starting point of the project.On of the idea comes from the "transformation" of Icarus to a bird, his flight, his contemplation, and his fall… Beyond these poetic images, perhaps the concepts of transformation and the gestural aspect were one of the leading force in the composition process.

Metaphorically, the piece begins with a flutter of wings and, to achieve this "sound", I have used some special techniques of writing, where the musician plays on different parts of the double bass body, producing various noises, similar to the sounds produced by a flying bird. Following this logic of transformation of the sound material, the instrument opens gradually. From those noises, appear progressively some few notes, then some rhythmical ppatterns, harmonies, thus giving birth to a new material, as if the music is constructed gradually by itself.

Furthermore, this idea of transformation is also expressed in the electronic part, which can be considered as an extension of the instrument. Appart from pure electronic sounds, most of the material in the piece is coming from some recordings of the double bass which have been transformed in the studio ; therefore, the musician plays a kind of duo with himself ; the electronic part acts like a kind of mirror : sometimes very close from instrumental texture, sometimes completely distorted, and finally creating some constant movements between stage and loudspeakers. 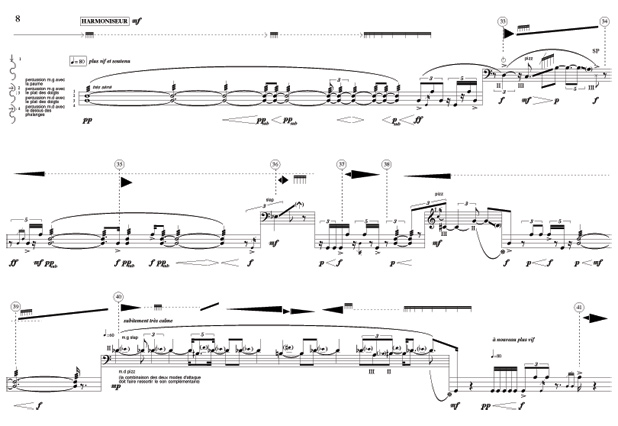